Raw Milk vs Pasteurized vs UHT - The Milk Debate

Is It Safe to Drink Raw Milk?

Raw milk is getting a lot of public attention lately, because commercially available milk is linked to health problems. Is it safe to drink raw milk though? Why is raw milk better than pasteurized? What is the difference between raw and pasteurized milk, and what is UHT milk?

The increasing interest in drinking raw milk is legitimate, however the real problem might not be the pasteurization of milk, but the ultra pasteurization. Raw milk has proved to have great health benefits, yet the legislation doesn't allow its distribution, because of the risks of infection with bacteria.

Another problem is with the disinformation on the subject. Many people don't know anything about raw milk, and if you gave a starving person a glass of raw milk they just wouldn't drink it because they think raw milk is not edible. While raw milk poses some risks, my personal opinion is that the risks are too little compared to the benefits of drinking unprocessed milk.

Pasteurization is the process of heating up foods, (usually liquids), to a certain temperature, to kill microorganisms. The treated food is the immediately brought to low temperatures to prevent bacteria growth. The original pasteurization, as invented by Pasteur, was not intended to kill all bacteria in food, it was only meant to reduce the number of microorganisms that can cause diseases and spoil food, so that it is easier to transport and store.

The most used milk pasteurization, (HSTS, high temperature short time), is required by most national food safety agencies. HSTS, is a process where milk is heated for a short period of time, to a high temperature. The heating temperature is 72 ºC (161 ºF), and the heating time is 15-17 seconds.

Another pasteurization method is the High temperature short time Pasteurization (HTST), where the milk should be heated between 89 ºC-100 ºC (191 ºF-212 ºF), the higher the temperature the shorter the heating time. 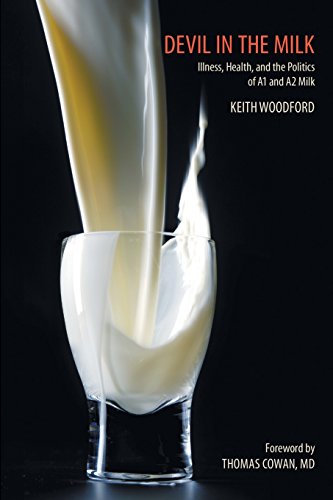 Devil in the Milk: Illness, Health and the...

Illness, Health and the Politics of A1 and A2 Milk

"The Devil in the Milk" talks about the milk produced by many cows in the US and Europe. This milk is generically called A1 milk, and it is linked to a range of serious medical problems including diabetes, autism, and heart disease.

Milk that contains A1 beta-casein is commonly named A1 milk; milk that doesn't contain A1 beta-casein is simply called A2. Before a genetic mutation a few thousands of years ago occurred in some European cattle, all milk was A2. A2 milk remains high in herds in much of...

Is Pasteurized Milk Bad For You?

The answer is yes and no. The regular pasteurization methods are perfectly fine, and they are used by people for centuries to make milk safer to drink. However, the ultra pasteurization is known to change milk drastically. The proteins in milk change dramatically when heated at very high temperatures. There is no scientific evidence to show whether these changes are bad for our health or not, but there is a hunch that milk could be responsible for abnormal immune responses, to trigger allergies.

Another interesting fact is that an European Community study has shown that children who drink raw milk had a lower risk of develop allergies, hay fever, or asthma. Read more about GABRIELA - The Raw Milk Study. The study is even cited here by the American Academy of Allergy Asthma & Immunology, who says that modern dairy processing should be able to preserve the milk's integrity for the health of our children. However, this will probably reduce the shelf life of milk. I'd say UHT should have never reached the market. If you ever drank sour milk, and tried to see what happens with UHT milk if you try to make it sour, you'd understand what I mean.

It is surprising that there is very little research on the digestion/absorption of raw milk versus pasteurized milk. There are however many studies on overheated milk versus UHT milk. Nobody drinks overheated milk, why bother? Here is such a study: Digestion of Overheated Milk vs Pasteurized Milk Here is the only study that questions the effect of UHT milk on human body: UHT Milk

I will take back my little rant about the futility of studying overheated milk. I will admit that at least the research points us to possible conclusion, the more we heat the milk, the less digestible it becomes. Milk is one of the foods that can create intolerance, especially for those of African, or Asian descent. The biggest problem with commercially available milk though, is that by pasteurization, it is stripped down of all good bacteria, and precious enzymes that help us digest the milk. The higher the processing temperature, the more consistent the nutrient loss, and the changes. See, in natural state, milk is cleverly created by the mother nature, or God if you like, so that we can easily digest it and absorb its nutritious goodness. It contains lipase - which helps digestion of fats, lactase - helps digestion of the sugars in milk, and phosphatase that aids with Calcium absorption. When we overheat milk we kill these enzymes, so we reduce its digestibility. Pasteurization also destroys some of the iodine, and the vitamin C, B1, B12,. It also changes the whey protein, the fat, and some other changes resulting from the Maillard reactions. Probably the worst part is that some of the proteins change in ways that have been studied very little. Many raw milk advocates suspect that these changes are the root of the milk allergies. High temperature processing of milk will also modify other properties, which were never evaluated properly, and we don't have a full understanding of the digestibility of UHT milk.

Do We Need To Pasteurize Our Milk?

If the cows are kept in good conditions, and they are grass fed, and they go in the field every day, it is safe, but there is always a risk to get TB, Salmonella, E. coli, and Listeria. FDA explains in more details the dangers of unpasteurized milk. In an overzealous attempt to draw attention on the dangers of raw milk, the provincial regulatory organism "Public Health Ontario" produced a technical report which makes references to the GABRIELA study. Here are the two documents referenced: PHO's technical report on raw milk, and the protective effect of farm milk consumption on childhood asthma and atopy: The GABRIELA study.

The major problem with milk was always the conditions to raise the cows, and the milking conditions. The "farm factories" that are the present source of our daily milk, cannot guaranty a correct sanitation, and a decent life, so the cows live well and they don't get sick. The conditions are close to a concentration camp, the food is the most economical, the freedom is restricted, the space is confined. As a result, the cows' immunity is lowered, hence the need of antibiotics, the milk is also carrying some of the diseases associated with such an environment. You cannot drink this kind of milk raw, you have to pasteurize it.

I drank raw milk a lot, I lived a good part of my life in Romania, were selling raw milk was legal. It still is, but more formalities are needed now. Anyway, I used to buy the raw milk from farmers, and we preferred it because it was more nutritious, and tasty. We used to pasteurize it sometimes, and sometimes not. When we made yogurt we mostly didn't pasteurized it. Very often we just let it go sour. We loved it, it was easier to digest, and it didn't lose any of its nutrients and enzymes. I don't understand why sour milk is considered bad by many people. It is very close to yogurt, it has a lot of probiotics, and easier to digest than raw, or pasteurized milk. Then why the "bad food" label?

Ultimately, understand that there is always a risk associated with drinking raw milk. Some people take the risk, seeing more benefits for consuming raw milk. The decision should be yours.

How to Pasteurize Milk At Home

If you want to minimize the risks of TB, and still keep the milk as nutritious as possible, buy raw milk and pasteurize it at home. Just bring the milk to a boil, and when it starts to rise take it off the stove. If you want to boil it more, you need to keep only a half, or a quarter of the pot on the heater, or the milk will boil over.

The milk pasteurized this way, still has a lot of its original nutritional value, and enzymes. You can use this milk to make yogurt, if you have a little starter, (some yogurt, or kefir). The great thing about all fermented milk is that is loaded with probiotics, for more info on probiotic food read this page about "How to Make Probiotic Foods" 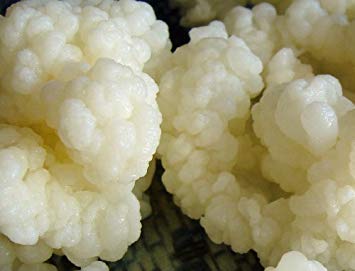 Make your own kefir. By fermenting the milk, you obtain a delicious drink, very nutritious, and easy to digest. In the process, even commercial milk will get back some of the lost enzymes through pasteurization.

You will get two tablespoons of fresh kefir grains, so you can start making kefir, and growing your own mushroom.
The grains have never been dried or stored in the fridge or freezer, which makes them more active, and healthy.
The kefir grains come with a two pages instruction booklet, which for many begginers can be not enough to start. Occasionally, the grains arrive dead at the destination because of handling and transportation. In 90...
Related Content

This prebiotic/probiotic shake recipe is a great starting example for anyone that wants to eat healthy and tasty. There is no reason to give up the joy of eating, or drinking a shake, we can have delicious and healthy shakes. This is not your ordinary probiotic food, it is packed with a lot of good bacteria and soluble dietary fiber.

Synbiotics – The Art of Combining...

Synbiotics are the best way to ensure a maximum benefit from the ingested probiotics. The term refers to the synergy created by getting both probiotics, and prebiotics to feed the human microbiome.

What are Fermented Foods and The...

Fermented foods are foods that are transformed through controlled fermentation, by microorganisms. Food fermentation has various objectives such preservation, taste and aroma enhancements, or even obtaining absolutely new foods, or drinks, without any resemblance of the original ingredients.