Lactobacillus gasseri is probably one of the most beneficial probiotics discovered. It is also one of the safest probiotics, as the vast majority of the probiotics from the Lactobacillus genus.  Lactobacillus gasseri is very effective, and it can be used as a single strain in probiotic supplements, and it is also found in many probiotic blends.
L. gasseri is a normal inhabitant of the human intestinal tract, and it is also part of the vaginal microflora. This amazing bacterium is also found in our mouth. Recent research on this amazing bacterium brought to the attention of the probiotic industry, and many manufacturers already included it in their probiotic formulations.
In theory, L. gasseri should be able to colonize the gut. The mannose-specific proteinaceous adhesion helps its ability to attach to the intestinal linings. This means that, at least in theory, it could form a healthy colony in your intestine, and you could stop taking it, whether you get it from a probiotic supplement, or from a food. In real life, I found that once I stopped taking the supplement the effects have diminished at first, and then disappeared. Read this post on how I accidentally lost 10 pounds in 8 months without any effort, and no diet.

Probiotics use in medicine is an incredible revolution in the medicine world. From the antimicrobial approach that was used not too long ago, to the concept that microbes are our friends, and we can use them to cure illnesses the medical world has gone a long way. The microbe revolution in medicine is one of the most important ones. We realized in the latest years that so many illnesses and mysterious conditions are linked to an imbalanced microbiome. More studies show how important is the symbiosis between humans and microbes. Even some pathogens have their importance in the big picture, and help us stay healthy. Looking back at the history, we know now how important is to take a holistic approach in medicine. Allopathic medicine evolves and embraces now many alternative methods.
Probiotics can benefit you in many ways, and an imbalanced microflora will always lead to health problems. Probiotics from the Lactobacillus genus are the most used in the industry because of their vast range applicability. Here are just a few examples:

L. Gasseri is one of the fewest strains that can help with weight loss. There are a few strains of gasseri that were scientifically studied for weight loss. This study on rats proves the efficacy of the LG2055 as an anti-obesity probiotic. A Korean study on humans, showed that Lactobacillus gasseri BNR17 can be used to reduce weight in overweight and obese adults. Another study conducted by a group of Japanese scientists showed that fermented milk containing the SBT2055 strain of L. gasseri is effective to burn abdominal fat, and reduce overall weight.

H. pylori infection is one of the major causes for many gastroduodenal diseases, including gastric ulcer, duodenal ulcer, and acid reflux. Antibiotic treatment has many side effects, as the antibiotic destroys the entire intestinal microflora in the process. The Journal of Clinical Microbiology published this article where a team of Japanese scientists show the effectiveness of the Lactobacillus gasseri strain OLL2716 to reduce populations of H. pylori.

Like most of the probiotic microorganisms, Lactobacillus gasseri can stimulate immune response, boosting our body’s capacity to defend against pathogens. This study researched two strains of the species. The study demonstrated that the two strains, L. gasseri OLL2809 and L. gasseri L13-Ia are highly effective in modulating in vitro dendritic cells and enterocytes.  In another study it was showed that the strain TMC0356 can modify the immune response even if the microorganisms are dead.

There are many probiotics that help women stay healthy. The OLL2809 strain of L. gasseri works great for alleviating menstrual pain and dysmenorrhea in patients suffering from endometriosis.

L. gasseri was administered to mice, in a study to determine its effectiveness in reducing inflammation of the intestine of IBD affected subjects. The study found evidence to show the probiotic as a promising treatment for IBD. Although it is speculated that some gasseri strains should also reduce inflammation of the joints, there is no research to support this.

Another benefit related to the inflammation is the reduction of allergic rhinitis symptoms. In a study on guinea pigs, L. gasseri TMC0356 showed the ability to alleviate nasal blockage.

Various strains of Lactobacillus gasseri were studied for their ability to lower cholesterol. Although the cultures were effective in various degrees, they still did lower cholesterol. In another study, L. gasseri SBT0270 was shown to have a hypocholesterolemic effect. 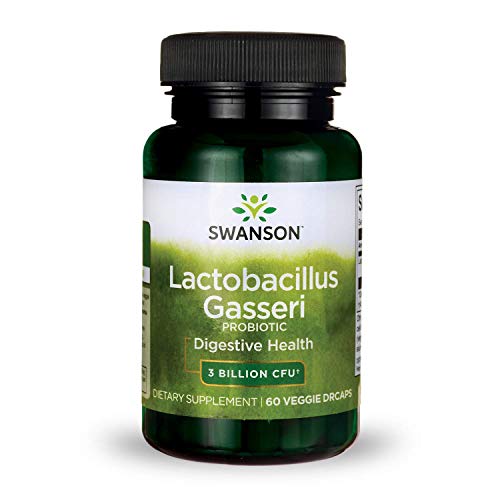 Lactobacillus Gasseri was named in the scientific circles "the fitness probiotic". Its capability to help our body regulate levels of leptin, makes it unique and a valued ally in our fight to stay fit. Leptin is a hormone that has a critical function in fat storage and energy metabolism. Leptin is "the satiety hormone" as it helps us control the sensations of hunger and fullness, and acts as a brake on appetite while boosting metabolism. A problem with many people who diet to lose weight is that the levels of leptin decline during the diet, slowing down metabolism in order to conserve energy. It our body’s...

Side Effects of Lactobacillus Gasseri

Most probiotics on the market are sold as foodstuffs, and very rare as drugs. Probiotics from Lactobacillus genus are generally safe, but some strains can cause opportunistic infections. Since Lactobacillus gasseri is a normal inhabitant of our gut, it is safer than foreign microorganisms.
There some mild effects associated with Lactobacillus gasseri, but they are transitory, and the side effects stop once you stop taking the probiotic. As many other probiotics, it will trigger bloating and gas. Depending on your diet, you can get serious abdominal pain due to the gas pressure. People with weak immune system should talk to a doctor before taking it, (and any probiotics for that matter). People with short bowel syndrome should also not take it without consulting a doctor. If you are taking an immunosuppressant you should not take any probiotics without talking to your doctor.
If the side effects are intolerable stop taking the supplement, and start with a lower dose in a few days. As your microbiome changes, you will tolerate the probiotic better in time.
Check this article for more general considerations on safety of probiotics.

Lactobacillus gasseri is found in many fermented foods but in minimal quantities. It can be found in puba, or carimã, a Brazilian food made with fermented cassava. It can be also found in fermented meats. Another natural source is Kefir, fermented milk similar to yogurt. Breast milk also contains L. gasseri in important quantities.
The ideal diet should include various fermented foods, and this way we can supplement with various strains. In real life, however, this is not easy, because fermented foods are not commercially available. The Lactobacillus gasseri supplement is one of the fewest I recommend buying. I eat kefir regularly, I prefer it to yogurt, though sometimes I switch between them, however, kefir is not a big source of L. gasseri. The point is, you can’t really get it from natural sources, and the benefits of taking it regularly are remarkable. Swanson has a supplement with the unique probiotic – Lactobacillus Gasseri. If you want a blend instead, you can check our comprehensive list of probiotics, you can find a few probiotics with lactobacillus gasseri.

Probiotics for Weight Loss – The...

Learn how I lost 10 pounds in 5 months by accident. The reason is a probiotic supplement that I took for something else. I struggled to get rid of the 10 pounds since forever. I reached now a perfect BMI without any diet and effort, learn how.

Hyperbiotics Pro-15 is a probiotic supplement created with attention to the smallest details, and with efficiency, as the main objective. As a result, Hyperbiotics is a best seller, and the product reviews are great. They are making adjustments to the product based on new research, and on customer feedback, and this improves the product constantly. See inside the article all the reasons why I love this product so much.

VSL #3 is one of the best probiotic supplements. Is hard to make it on the top ten list, and with so many choices, manufacturers have to compete in a market that is more and more knowledgeable, and has comparison terms. However, VSL #3 is making that top ten easily.