Bad breath can be caused by many causes, but very often it is caused by a bacterial imbalance in your mouth. A bacterial infection will cause an abnormal growth of a particular bacteria, or yeast, and it will cause bad breath, and sometimes, plaque deposits that cannot be managed with regular oral hygiene.

An oral bacterial overgrowth sometimes is treated with antibiotics, or clorhexidine, which is usually fine, and many times fixes the problem. However, because of the nature of antibiotics, the antibiotics could fix the problem on a short term basis, and then the problem might resusrface, even more virulent than before. Don't get me wrong, clorhexidine is fantastic, and I have someone close that used it and fixed a bad gingivitis. Their dentist was amazed about the great progress after using clorhexidine. However, clorhexidine is a powerfull solution, that should be tried if probiotics/prebiotics don't work.

In normal conditions, probiotics existing in our mouth defend us by killing the pathogen yeasts, and bacteria. Antibiotics kill all bacteria, indiscriminately, good or bad, and when the native oral microflora is inexistent, opportunistic yeasts, or bacteria, might develop faster than normal, because there is no competition for them anymore. This is why oral health probiotics are very efficient. They only kill pathogens, and they cohabit along with the oral microbiota, helping it rid of the intruders.

BLIS Technologies Limited, a New Zealand company, has a lot of research in the oral health probiotics, and they have on the market two probiotic supplements that target the oral cavity area. Blis M18 was developed for preventing gums disease and tooth decay.

The other probiotic from BLIS Technologies is BLIS K12, which is one of my favorite probiotic supplements. I usually try to supplement naturally with probiotics, from fermented foods, or with a prebiotic foods supplementation, if my diet is poor at times. However, this is one of the probiotics that you can't get it from foods, you either have it or you don't. BLIS K12 is a special strain of Streptococcus salivarius, a normal cohabitant of our mouth. BLIS K12 is very active, compared to other Streptococcus salivarius strains, and they produce Bacteriocin Like Inhibitory Substances, that kill foreign bacteria and viruses. 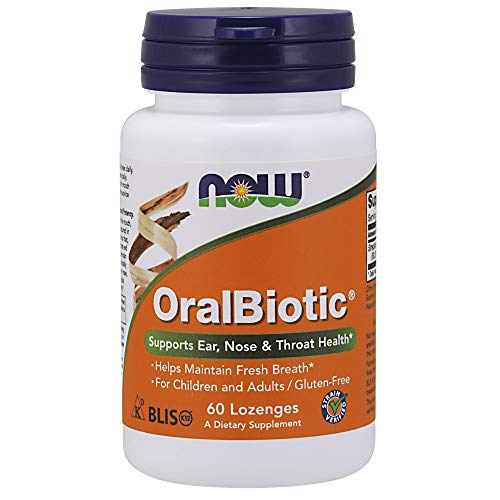 Now Foods are known for their effective supplements at decent prices. Oralbiotic Blis K12 make no difference, it is a branded version of the BLIS Technologies probiotic strain. It contains 1 Billion CFU per lozenge, and some sugar replacements to make it palatable. Also contains xylitol, which is another germ fighting compound. The supplement has great ratings on Amazon, and is one of the best selling oral health supplement.

Streptococcus salivarius BLIS K12 is now almost famous, with so many people getting great results in maintaining a great oral health. BLIS is an acronym for bacteriocin like inhibitory substance, and the term is used to describe the capability of certain...

BLIS K12 is found naturally in the oral microbiota of some people. Unfortunately, only a small number of people has this strain. Most of us don't have it, and we are relying on our immune system to defend us against pathogens. For me, the most amazing thing about this probiotic is that it kills the bacteria that causes halitosis, (bad breath). Although, this migh not have been the initial purpose for the research around K12, this came up as a bonus, and it is confirmed through scientific research, that it works.

Lactobacillus salivarius is another researched bacteria with great results in controling bad breath. Research on halitosis and probiotics, showed that L. salivarius, not only reduces halitosis, but also reduces the plaque formation, and gingivitis associated bleeding. 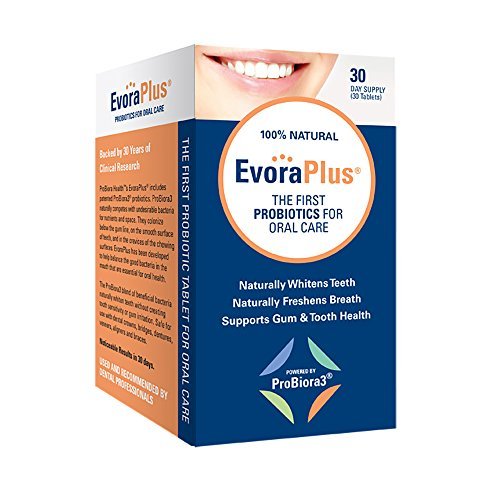 EvoraPlus is a probiotic supplement to improve oral health. EvoraPlus is based on a probiotic blend of three strains, named Probiora 3. Probiora 3 contains freeze dried bacteria, that are in a dormant state, and that will activate once they come in contact with our saliva.
The blend is formulated with Streptococcus uberis (S. uberis KJ2), Streptococcus oralis (S. oralis KJ3), and Streptococcus rattus (S. rattus JH145), three naturally occurring bacteria strains, cohabitant of our mouth. The strains were selected for their ability to fight pathogenic bacteria, by changing the chemical balance in our mouth. This chemical composition promotes the development...

VSL #3 is one of the best probiotic supplements. Is hard to make it on the top ten list, and with so many choices, manufacturers have to compete in a market that is more and more knowledgeable, and has comparison terms. However, VSL #3 is making that top ten easily.

Info about the best-selling, top rated probiotic supplements, the list of strains, and other components in their ingredient list. The list is based on Amazon ratings and selling numbers, and our research, and is meant to help potential buyers to choose a probiotic.

Hyperbiotics Pro-Dental is a probiotic supplement, combining BLIS K12 and M18, for dental and oral health. The blend is very effective for reducing throat infections and plaque deposits. The two strains work in tandem to prevent and reduce various conditions caused by bad bacteria in your mouth such as gingivitis, tooth decay, tonsil stones, throat infections, etc...