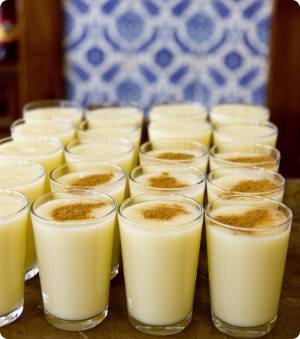 Although the original recipe is done with millet, boza can be made from other cereals as well, and it is equally tasty and healthy. Most often it is made from bulgur, which is more accessible, and easier to process. In most of the Eastern European countries, the drink it is called boza, after the Turkish name, where it originates apparently, or braga in Romania. There is also a similar recipe made from bread, called kvass, and that recipe was firstly brewed by Russians.

Boza is a thick drink, slightly alcoholic, with a sour- sweet taste, that varies depending on the amount of sugar added, and the fermentation length. Typically, in Turkey, the drink is mostly drank during winter because its warming effect, and helps our body to fight viruses during the cold season. However, there is nothing better to drink during a hot summer, then a cold boza. In fact, in Romania, braga – (Romanian’s name for boza) – used to be the summer drink of choice. This is not true anymore sadly, the little shops that used to sell braga slowly disappeared. There are only a handful of boza shops in Romania. In Turkey there are more boza shops, but their number are nowhere near where it used to be. Bulgarian, and other Balkan countries, ( Albania and Macedonia), sell it commercially bottled. However, many of the bottled products are not of the shop sold quality, because of the need to extend the shelf life.

Boza is an amazing fermented drink, which contains a lot of probiotics, vitamins A, B, and E, in a highly bioavailable form, and it caries all the health benefits of a probiotic drink. Containing a lot of lactic acid bacteria, is a great source of probiotics.

There is a myth in the Balkan countries, that drinking boza regularly makes women grow bigger breasts. Although, there is no scientific support to this claim, women are convinced that this works. 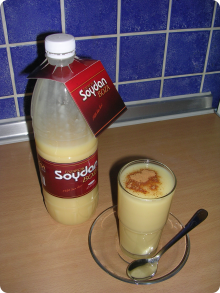 How to Make Boza

Soak the bulgur overnight in one gallon of water. Next day add more water and rice and boil it until soft, so you can mash it with an immersion mixer. If needed, complete with water to maintain the volume. Add the sugar to the mixture, and stir from time to time. Take it off the stove and mash it thoroughly. Add water to complete the two gallons volume. When the liquid is lukewarm add the yeast, or the old boza, this will be your starter. Leave the mixture for 3-4 days in a warm place, but not hot, (68 – 77 ºF). After the 3 or four days, put it in the fridge, and drink it cold, sprinkling the drink with cinnamon.

Another Eastern European drink made by fermenting grains is borş. Borş is a savory drink mostly used to sour Romanian soups, but many Romanians attribute it healing properties when consumed raw, uncooked. Unlike boza, borsh is fermented without any sugar, and traditionally is made with wild cultures. Read more about it here.

6 thoughts on “How to Make Boza Drink”