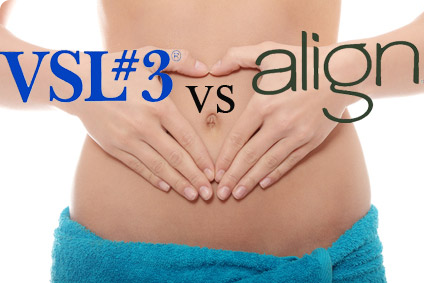 VSL #3 and Align are probiotic supplements designed to treat IBS, and other gastrointestinal problems. Although they are both very efficient, and they both have great reviews from buyers, they are different. They both have enough research to prove its efficiency, and they both come with some side effects. If you are looking for a probiotic to tread IBD, these two are probably the most trusted brands. Align is manufactured and marketed by Procter & Gamble, and VSL is produced by Sigma Tau Pharmaceuticals.

One of the most interesting differences between the two probiotic formulations is the dosage. This is particularly important because it affects the cost of the treatment, and the maintenance cost afterwards. Another difference is the number of strains; Align only contains one strain, and VSL #3 contains 8 strains.

There is a major difference between dosing the two products. According to a study aiming to verify the efficacy of Align, the beneficial dose is 100 million CFU. The lower doses administration, (1 million CFU), did not provide any help. The higher dose did not help either, but it looks like there was a problem with the formulation of the product for the 10 billion dose, during the clinical study. The P&G product is presented as capsules, with 1 billion active bacteria per unit. One Align capsule per day is enough in most cases.

On the other hand, the efficiency of VSL #3 is dose dependent. For some people a low dose might work, while for people with serious problems only a high dose will show improvement. The most potent version of theirs is VSL #3 DS, which can be obtained only with a prescription, because of the possible side effects. Sigma Tau’s supplement is manufactured in a few versions; the capsules with 122.5 billion live bacteria per unit, the sachets with 450 billion CFU, VSL#3 Junior with 225 billion CFU per sachet,  and VSL #3 DS with 900 billion live lactic acid bacteria. This is 900 times more than Procter & Gamble’s product. But more, is not always better. 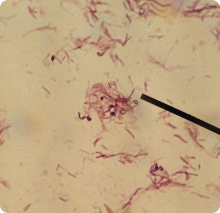 VSL #3 is a formulation of 8 strains:

This blend of bacteria contains strains that are known for reducing intestinal permeability, one of the causes in many GI illnesses. It looks like the blend from Sigma Tau is efficient because of the unique ratio between the different strains.

A box of Align, containing 28 capsules, is around 23$ on Amazon. This is the treatment for almost a month, considering that the recommended serving is 1 capsule per day. 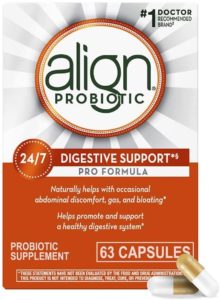 Align is probably one of the best probiotic supplements. The unique patented, strain Bifidobacterium infantis 35624 in Align is not found in any other products. The most notable effect of Align is on Irritable Bowel Syndrome. Many people report miracles after starting on Align. The only concern with Align are the additives, that for some people seem to create problems. I, personally didn’t have any problems with the additives, because the doses are so small that they don’t have any impact.

A bottle of VSL #3, containing 60 capsules, costs 50$ on Amazon, and it is the dose for a full month. The recommended serving is one capsule two times per day. Since for many people the minimum dose is not enough, the cost can go even higher. 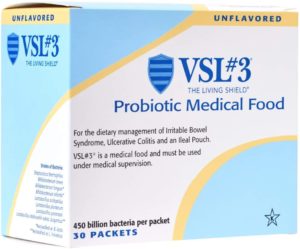 The sachets version of the VSL #3 contain 450 billion active bacteria, and a total of 30 sachets per box. This makes it the supplement with the highest CFU count in the industry.

The Amazon seller states that the product ships with an ice-pack, which is the right way to ship, and they also recommend to chose expedite shipping during the summer time.

If we compare the price per month, it is clear that Align is the least expensive with around half of the price. Is it though as efficient as its competitor?

Align vs VSL #3 – Which One Is More Efficient for IBS?

For moderate gastrointestinal problems Align is extremely effective, and it is, probably, the most recommended probiotic by professionals. That speaks volumes especially that probiotics are still new, and some doctors don’t even consider them in their prescriptions. There is no research about Align and Ulcerative Colitis, one of the most serious gastrointestinal conditions.

On the other hand, massive doses of VSL #3 are effective for treating Ulcerative colitis, and there are plenty of studies to confirm this. Here are a few links:
VSL#3 probiotic-mixture induces remission in patients with active ulcerative colitis. Link: http://www.ncbi.nlm.nih.gov/pubmed/15984978

And the list can go on, as there are numerous studies to confirm the efficacy of VSL in treating Ulcerative Colitis.

One question pops up on everybody’s minds, is how much is going to cost the maintenance treatment? Do we need to take probiotics after remission? The answer is not that simple, but if we were to resume it, most likely you will need a maintenance treatment, and the cost will likely be lower than the initial treatment. Is it possible to completely cure the condition, so that you will never need probiotics? In theory yes, the condition can be completely cured, but it takes more than probiotics, and it works better for young people. Gastrointestinal disorders are in many cases caused by a microflora imbalance. There are a few things you can do to restore microflora, and taking a probiotic is just the first step. Taking a probiotic supplement helps tremendously, because it reduces the pathogen microflora, so that the good bacteria can outgrow the bad microbes. Probiotics also help heal the intestines, lowering its permeability, and prepare it so that it can host your natural microflora. The objective is to colonize your intestine with good bacteria that defend your body from pathogens.

As the next steps, you need to feed the good bacteria food that stimulates it – prebiotics. You can do this by changing your diet to include more prebiotic foods, or you can just take prebiotic supplements. This will slowly build your microbiome into the powerful symbiotic ally that it should be.