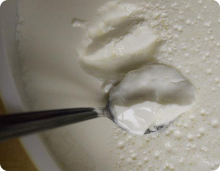 Yogurt is a fermented milk product, made by controlled fermentation with special cultures. The cultures contain selected bacteria, that produce lactic acid giving the milk the sour taste. The bacteria also modify the milk’s texture, giving it the specific thickness that is very prized. Although there is an increased interest in vegan yogurt, we are not discussing vegan yogurt here.

The cultures that are used to ferment milk into yogurt are Lactobacillus Bulgaricus, Streptococcus Thermophilus, Lactobacillus acidophilus, and Bifidobacteria as the most common, with some producers using also Lactobacillus casei. Yogurt is one of the most known, most sold and most consumed fermented foods in the Western hemisphere. The relatively recent discoveries about the beneficial bacteria, or probiotics, has increased the interest for authentic yogurt, based on the original recipe. There are a variety of so called yogurt products on the market, that are just milk products artificially thickened. These don’t carry any of the health benefits of the real yogurt.

Ilya Mechnikov is considered the discoverer of the amazing health benefits of the yogurt, however, Mechnikov’s work was inspired by Stamen Grigorov, a Bulgarian doctor.

The benefits of yogurt stem from the probiotics present in it content. The probiotics, (good bacteria), are needed by humans for a healthy gut, and strong immunity. The bacteria live in symbiosis with us, boosting our immunity, and taking in exchange foods that we cannot digest.

Among the benefits of yogurt we should mention the following:

Unconventional Uses and Benefits of Yogurt